As the originator of #Bond_age_TV, I’m really excited to get started on what I hope will be a very entertaining run of live tweets as we spotlight The Man From UNCLE.

As Bond films started hitting the big screen in the US during the early 60’s, TV networks sought to fill their programming schedule with as many spy shows as they could get their hands on. Homegrown shows like I Spy, Get Smart, and Mission:Impossible shared the airwaves with UK imports like The Avengers, The Saint and Secret Agent. Everyone wanted to jump on the spy show bandwagon.

Norman Felton, one of the men behind The Man From UNCLE, came up with the idea of asking Bond creator Ian Fleming to develop some ideas. Fleming agreed, and came up with a concept and a character: Napoleon Solo. This did not sit well with the Bond producers, as their next film, Goldfinger, also featured a character named Solo. Eventually, both sides were able to come to an agreement, and Napoleon Solo was allowed to keep his name, but the pilot needed retooling. Solo became The Man From UNCLE.

When UNCLE finally aired in 1964 (the original pilot was shot in 1963), the two stars, Robert Vaughn and David McCallum, became worldwide celebrities. It became so popular around the world, in fact, that MGM had several of the episodes re-edited into feature films (usually by including more adult situations), and released around the world (except, curiously, the United States, where only 2 of the 8 films were shown theatrically.) The show did have some issues, however, mostly behind the scenes. The key problem the show faced was that it lacked cohesive direction. Storylines went from serious to the idiotic and everywhere in between. It had at least 5 showrunners over 4 seasons, and the ratings showed that the audience wasn’t there anymore. It was cancelled in 1968. Despite the short run, however, it remains one of the best programs from the 60’s spy craze. That, along with its ties to Fleming, makes it the perfect choice for #Bond_age_TV’s first longterm live tweet project.

With UNCLE episodes available both in the original aired versions and feature film versions, it was difficult to decide which version to use for the live tweets. Taking a page from @007hertzrumble, though, I decided that we’ll do both. The first run will be the original episodes (with various imposters and icons in between), and the second run will be the theatrical versions. This brings us to this Wednesday’s live tweet. There are actually 3 versions of the pilot in existence: the 1963 Solo pilot, the 1964 aired pilot, and a theatrical version (To Trap A Spy). The theatrical version will wait until the second run.

Wednesday, March 12th we’ll be showing the 70-minute Solo pilot at 9pm EST, followed by the 50-minute version at 10:20pm. Hope you’ll join us for some great #Bond_age_TV with the Man from UNCLE Pilots! Follow #Bond_age_TV hashtag. 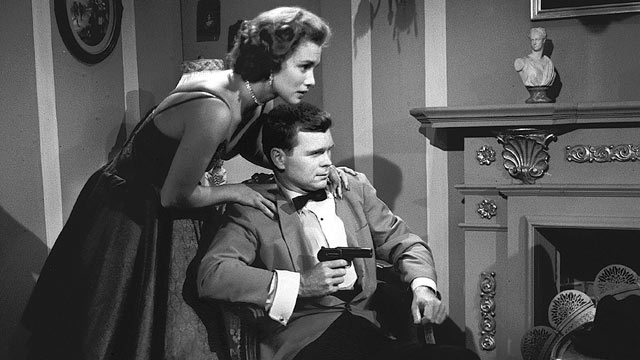