Now a measure of backstory. You know I love me some backstory. 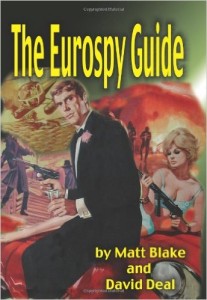 About a year or so ago I picked up the Eurospy Guide by Matt Blake and David Deal. This tome is an exhaustive, comprehensive, obsessive guide to all things Eurospy. Eurospy being the broad name for the rampant Bond knockoffs that proliferated throughout Europe during the 1960’s. These films were parodies and comedies, straight rip offs, and genuine attempts to mold the spy genre. But most all of them were cheaply made to cash in on the spy craze. There were, of course, a few exceptions to the rule. But those aren’t necessarily any more interesting than these cheeseball hackjobs. We’ve live tweeted a few of the most prominent Eurospy films. Deadlier Than the Male and Kommissar X come to mind immediately. These are well known and well-regarded entries in the genre. Before I started reading Blake and Deal’s Eurospy Guide, I thought I had a good collection of these films and a serviceable working knowledge of the worthwhile *and* available Eurospy films. After a week with the Guide, I learned that I knew nothing. I was a sham. I con-artist serving up my Eurospy knowledge as expertise.

I’ve come to set matters right… because somehow I’d not seen or heard of the Ken Clark spy trilogy.

A few entries in the Guide stood out. Blake and Deal do a good job of describing the relative availability of the films as well and how some of them might be found. I came across the listing for Mission Bloody Mary. Here’s a selection:

“Add to this a gang of incompetent Russians, a number of double-crosses, and an assortment of unbelievable gadgetry and you have a highly entertaining example of the genre.”

That sounded like something I needed to earmark. HOWEVER. I went on to learn that this was the first of three spy films starring Ken Clark (who I knew only from Attack of the Giant Leeches), and the third film in the series co-starred Daniela Bianchi. Daniela Bianchi, you say? Only Daniela Bianchi of From Russia With Love fame, the #Bond_age_ muse if #Bond_age_ had a muse… (On second thought let’s just declare her the official muse and move on.)

Without further adieu I set about tracking these films down. I learned that a small DVD distributor called Dorado Films had released the trilogy in 2009. Though you could find the individual out-of-print films for about $50 per, I wanted the whole trilogy. I needed this set. $150 dollars for three low-quality DVDs I’d never seen seemed pretty damn steep. What was a guy to do? I sent emails and Facebook messages to Dorado imploring them for answers (but mostly any way they thought I could get my hands on the DVDs). After some further Interweb searching I found that Dorado Films had a Roku channel. And that Roku channel one could potentially watch the films distributed by Dorado Films. There I found that second Ken Clark film, co-starring Daniela Bianchi and that night endured the jaggies, the jitters and the commercial-interrupted stream of Special Mission Lady Chaplain. Slight spoiler, but Daniela gets to vamp it up and it is glorious. This was well and good for my own personal satisfaction of having seen the film, but how could I share my discovery with the #Bond_age_ masses? I couldn’t make anyone else endure the Dorado stream. (They did eventually get back to me, by the way, with a tremendous shoulder shrug.)

After months of intermittent searches on Ebay and Amazon, I finally found a copy of the Ken Clark trilogy on Amazon UK for $50 shipped. SOLD. Some of you may have been on Twitter when I finally located the set. I must have sent out a dozen celebratory tweets. I guarantee you thought I’d lost my marbles. Since my acquisition I’ve been waiting for a good moment to begin the live tweet of the trilogy. The time is now. Beginning next week, on August 19th, we live tweet episode one: Mission Bloody Mary. Fans of rare and underseen 60’s cinema would do themselves a favor to join us at the beginning of this journey.

I first wrote about the film for @bobfreelander’s Underrated ’65 series on rupertpupkinspeaks.com.

As a full preview, I’ll paste that blurb below.

Mission Bloody Mary opens on a rainy night. A police officer stops to aid a woman stranded on the side of the road. Of course she’s beautiful. Of course she’s exotic. Of course she’s sopping wet. And of course she stabs him with a flashlight dagger. Thus sets into motion the scheme to be foiled: a nuclear weapon’s on the loose and only a most cunning superspy can infiltrate the mysterious Black Lily crime syndicate to prevent a global meltdown.

This is the first of three spy outings with Ken Clark starring as Dick Malloy, American Agent 077. Clark plays James Bond filtered through the American ideal. He’s taller and physically more imposing than Sean Connery. Clark, he of the chiseled jaw, worked briefly in the Hollywood B-movie system (starring insuch films as Attack of the Giant Leeches) and made a few failed TV pilots before casting away to make spaghetti westerns, sword and sandal epics, and Eurospy movies in Italy during the 1960’s.

Though Mission Bloody Mary’s entrenched as a sincere budget Bond knockoff, it knows precisely which buttons to push. Beautiful women (in rose-petal pasties), despicable villains (though a little on the bland side) and exotic international locales. There’s a brutal fisticuffs sequence on a train (recalling From Russia With Love) that ends with an impromptu window guillotine. Though Ken Clark is a largely humorless actor, the script allows him bits of natural comedy that plays off his wooden persona. For example, Malloy starts a bar brawl with a few sailors as a distraction and all the while fights with a lit cigar (James Bond meets Hannibal Smith). At one point a henchman makes a crack about 077’s cardigan sweater and subsequently pays the ultimate price.

As with almost all of these mid-60’s cheap Bond knockoffs, there’s bad acting and poor dubbing, vague motivation and few logical narrative threads. This first Ken Clark outing features all of that… but Mission Bloody Mary manages to offer its own brand of whimsical, half-baked cardigan-clad thrills with panache.

I really hope that sells you. These films are super low-budget Bond knockoffs, but they’re great fun. This is why we live tweet. This is why we’re fans of spy films… the incestuous references to Bond, the 60’s aesthetic, the hamfisted dialogue and cheesy one-liners. They’re all here.

The schedule for the Ken Clark live tweets: (all will appear as embeds right here on the website) 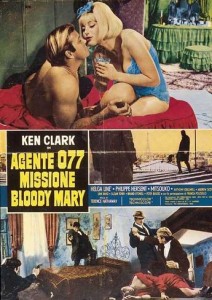 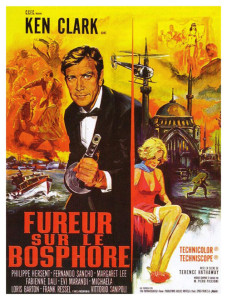 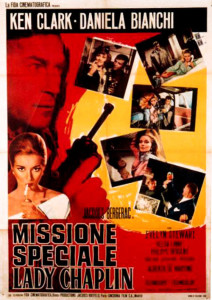