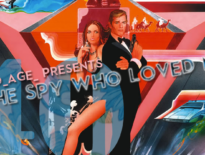 Blog The Spy Who Loved Me 40th Anniversary Live Tweet
0