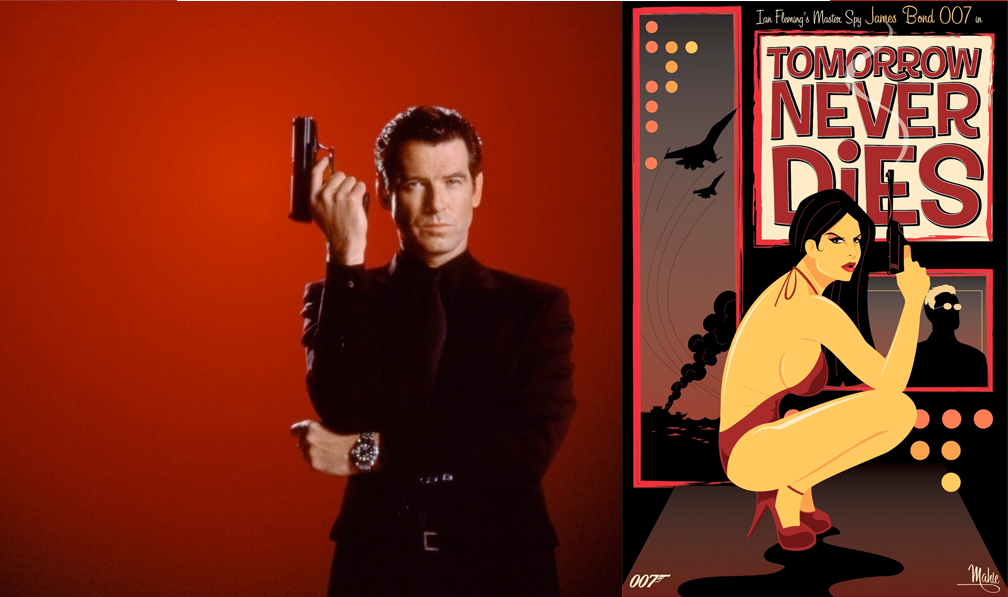 I may be biased since Tomorrow Never Dies was my first Bond film in the theaters, but Pierce Brosnan is the “Perfect Bond” in Tomorrow Never Dies. For the purposes of this writing, “perfect” does not mean “without flaws.” It means: “the right combination of his previous incarnations.” Through #Bond_age_, I have learned that everyone has a favorite Bond and everyone has reasons for disliking – even hating – the rest. Tomorrow Never Dies is the best combination of all the previous Bonds. It’s the Perfect Bond movie because there is something for every fan.

Action from the opening moments in the arms bazaar. The scene was originally meant for Timothy Dalton’s The Living Daylights, but was scrubbed from that movie. Dalton was a younger Bond that enhanced the action with bigger and better stunts. It was mostly a byproduct of 1980’s moviemaking, but that’s what differentiated Dalton’s Bond from what had come before. Up until him, the most noteworthy stunt was the javelin jump in The Man With The Golden Gun. With Brosnan they maintained that Dalton-level action, and Tomorrow Never Dies is the perfect balance of improbability and realism without being too outlandish (see Die Another Day).

The only part of Tomorrow Never Dies that borders on the outlandish is the villain. Jonathan Pryce is a bit over the top in his performance as Elliot Carver, but for most of the movie it works. Carver continues the tradition of eccentric Bond villains/profiteers – a staple of the Roger Moore films (see Kananga in Live and Let Die, Scaramanga in The Man With The Golden Gun, Max Zorin in A View to a Kill etc.). Thankfully, they don’t give Carver a specific, defining quirk like the fact that he just really likes gold. He is simply a greedy man with a Blofeld-ian level of control (via the worldwide media) over world leaders and events. Carver is seen talking to members of his inner-circle via video phone, a scene reminiscent of the SPECTRE meetings only with far fewer spontaneous executions. Carver’s most over-the-top scene takes place when he mocks Wai Lin’s martial arts techniques, but somehow the talented actor Pryce manages to preserve the moment with his following line: “Pathetic.”

The villain proves not to be the only thing here for the Moore fan (and I hear there are many of you among us). Brosnan pulls off, quite spectacularly, the humor that was missing in the Dalton films. Sure the one-liners had always remained, but with Moore it was different. He was funny. He knew he was part comedian and not just a grim wiseacre. The defining moment of Moore’s brand of Bond comedy has to be when he drives the car out of the water, rolls down the window of the Lotus submarine and drops a fish out onto the beach. Brosnan is the only other guy I could see making that work. Moore and Brosnan’s Bonds are the only ones that seem to be having fun on the job. Sure it’s a mission and a paycheck, but they enjoy the day-to-day grind, too. If you doubt this, just watch Brosnan’s face as he drives the remote-controlled BMW through the parking garage. Despite the gunfire and danger, he’s having a blast.

Brosnan even borrows from Connery’s Bond. Connery played 007 as a real man’s man who objectified women on an hourly basis – certainly the “misogynist dinosaur” referenced by M in GoldenEye. In Tomorrow Never Dies though, we do get a bit of Connery’s swagger from Brosnan when he doesn’t hesitate to use Paris Carver to get to her husband. Brosnan, like Connery, also undermines the abilities of the women he runs into on his mission. He spends a good portion of the movie doubting Wai Lin’s utility only eventually acquiescing when he witnesses her physical prowess and acuity under pressure. You know this is still the 1990’s, however, because Brosnan does eventually catch on, whereas Connery would belittle her (probably on a seafaring vessel) well into the credits.

Also, on the topic of Connery, shortly after a glimpse of the Aston Martin DB5, Tomorrow Never Dies gives us a view of the only other chest hair in the series that could hold a candle to Connery’s. Sure, no one’s a Connery fan because of the chest hair, but someone’s got to tackle that hard-hitting journalism.

Tomorrow Never Dies also offers us something we haven’t seen in a while: a Bond with emotion. After his one-nighter with Paris Carver, she winds up dead. When Bond finds the body, he appears genuinely heartbroken. He doesn’t quite show some Lazenbies from On Her Majesty’s Secret Service, but, if only for a brief moment, Bond has a heart. He might not care about every notch on his bedpost, but occasionally he admits, through a look or a glance, that this one meant something. Paris Carver was that woman at some point in his past. Her death affected him. That emotion quickly gives way to anger and a need for revenge, a driving force for many other Bonds, especially Dalton.

There’s one Bond that hasn’t been mentioned yet, and he is the Bond that proves the theory. Daniel Craig’s Bond is very different from all the Bonds before him. Whether you consider Casino Royale an actual reboot of the franchise, it stands out as a change in direction and tone for the films. Realism and grittiness took over, largely inspired from the success of the Bourne franchise. We don’t see these trademarks in Tomorrow Never Dies, because it was still part of the old school, when women were easier, things were a little more outrageous, villains a little more over-the-top, and Bond was a little more lighthearted. Tomorrow Never Dies encapsulates everything we loved and still love about Bond, before the world made it necessary for Bond to get a little more intense and a little more real. And, of course, before Bond jumped the shark (probably while windsurfing) in Die Another Day.

First Bond Movie: Either Dr. No or Goldfinger on VHS. Tomorrow Never Dies on screen

How I Discovered #Bond_age_: Twitter invite to join in on the original Thunderball session. 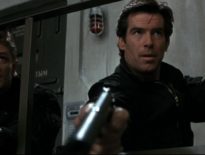 #Bond_age_ Project From the Ashes: The Twisty Tale of GoldenEye’…