Diamonds Are Forever: “Welcome to hell…” or Is It Just Las Vegas? 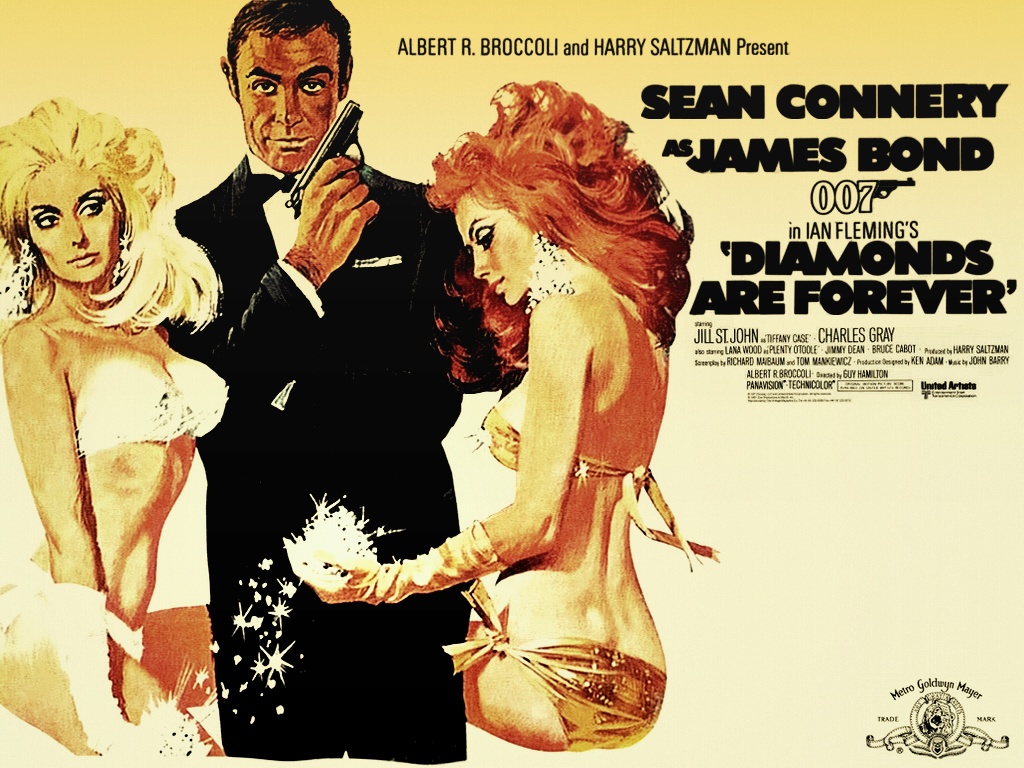 Diamonds Are Forever is by no means the best James Bond film, but it is certainly an idiosyncratic one. Blofeld clones? A moon buggy chase? Gay hitmen? Blofeld in drag? Country singer/future sausage king Jimmy Dean as a reclusive billionaire? Fitness-obsessed lesbians giving Bond an ass-kicking? You can only say you saw these in one movie. Diamonds Are Forever is nothing if not memorably off-the-wall.

When reviewing the strange case of Diamonds Are Forever, it’s important to consider a little historical context. 1971 was not exactly overflowing with movies you’d call “fun”. More like overflowing with “portraits of existential despair.” Bond shared the box office with films like The Last Picture Show and The French Connection. These are excellent films, but bleak, and lacking in that all important movie element – lasers. The return of Sean Connery and the promise of some honest-to-god entertainment (and lasers!) was enough for audiences to make the movie the third-highest grosser of 1971.

“We do function in your absence, Commander.”

The story of the Bond franchise must also be taken into consideration. Today, On Her Majesty’s Secret Service has rightfully been restored to a place of honor among the best Bond films, but at the time it was a freak, an anomaly no one knew what to make of. Despite being number 10 at the U.S. Box office (and doing even better world-wide), it might have felt like failure for a franchise that had previously shattered box office records four years earlier with the release of Thunderball. And with its tender love story, long run time and new star it may have confused audiences. I can almost hear them now: “This guy is supposed to be Bond? A butt-chinned male model? Bond falling in love? We’re supposed to watch this guy weep? Enough of this ‘real human emotions’ garbage. Where is the sports car that shoots nuclear missiles?”

OHMSS was a great place for the Bond series to visit, but it unfortunately couldn’t live there. The spy-mania that Bond had sparked in the earlier ’60s had taken its toll. World spy fatigue was setting in, and the Bond writers and producers could not ignore this onslaught. But with this over-saturation came the enlightenment of self-knowledge, a lack of which was the exact problem with Connery’s previous “final” film You Only Live Twice. The series had already become a parody of itself, but was still being acted and directed with seriousness. With Connery’s departure, the “failure” of OHMSS, and his subsequent return, the 007 series had finally become self-aware. With that self-awareness came the freedom to improvise on the basic formula in any way the producers chose. Whether they chose wisely I will leave up to the reader to decide. (But I know full well what the answer will be for most…)

“You killed James Bond!” “…goes to show no one is indestructible.”

Diamonds Are Forever is a straight-up comedy. While the series had always had it’s moments of humor and had flirted with self-referential elements before (see OHMSS‘s “This never happened to the other fella”), with Diamonds both of these elements came to the forefront. Discovering the high quotient of funny lines was the most pleasant surprise I had rewatching the film. In fact, I would wager it has the highest number of (intentional or not) funny lines per minute in the entire series.

The satirical element of the film makes it unique among 007s. I don’t think it’s a coincidence that the first Bond movie to take place almost solely in America* is also considered to be tackier and cheaper than what came before it. Nor do I think we’re supposed to take the sight of Connery in his usual tuxedo moving through a Vegas casino full of average Joes too seriously. The contrast is there to be laughed at. This is Bond’s fish-out-of-water tale, the tradition of the English outsider getting a peek at American culture. (The funeral parlor scenes are reminiscent of the film of Evelyn Waugh’s “The Loved One,” though to no degree of that whacked-out masterpiece’s quality). The moon buggy chase is clearly another jokey reversal of the previous trends in the series. Nor does it seem like a coincidence that the first (almost) all-American Bond film features mud baths, spa treatments, plastic surgery, empty-headed bimbos, nightclub comics, funeral homes, tourists and self-made reclusive millionaires. Diamonds are Forever finds 007 rooting around in the same America that would be fertile ground for kitsch-lovers for decades to come. (Has anyone ever asked John Waters if he has a favorite Bond movie? Anyone want to place bets…?)

The big news, however, is that Sean is back. His one-picture vacation seems to have done him well. He has a healthy glow about him. (Although that could be a result of many things: the desert heat? Certain substances?) This new Connery, risen from the ashes of the old, breezes through the film, gracefully sidestepping the menagerie of kooks that surround him, deflecting their advances while being quick to quip. The Connery we see is but a walking ghost of the original 007, a shadow of the former man, but that means he walks this earth in stride, taking nothing that he sees too seriously. His cool ironic distance is very reminiscent of something else…someone else…

Diamonds Are Forever is the first Roger Moore Bond movie. It just doesn’t star Roger Moore. Connery’s Bond portrayal in Diamonds, and the characters with which he interacts, feels like the blueprint for Moore’s tenure as 007. Connery’s bored/amused tone is the exact way that Moore would skate through most of his time as Bond. Together with the first two Roger Moore films, Live and Let Die and Man with The Golden Gun, Diamonds forms a loose trilogy of “Bondsploitation” movies, lower-budgeted than the earlier films and with a distinct feel of appealing to the American market. All three films share the same director (Guy Hamilton) and screenwriter (Tom Mankiewicz). And like the exploitation films of the time, here the parts are worth more than the whole.

But what unique parts they are. Diamonds is the first Bond film to emphasize such a cast of quirky side characters. There is Mr. Wint and Mr. Kidd, the gay hitmen who walk hand in hand through life, casually attempting to snuff out James Bond. Played by super-creep Bruce Glover, father of future super-creep Crispin Glover, and Putter Smith (a non-actor, a jazz bassist who was discovered for the part by Cubby Broccoli while watching Thelonious Monk’s band) respectively, Mr. Wint and Mr. Kidd steal the show as oddball villains. They are the campy backbone of the film. There is Shady Tree, an ancient nightclub comedian who utters one of my favorite lines in the movie. (See the last bold quote in this essay.) Then there is Willard Whyte, aka Howard Hughes in-all-but-name, bringing in some slightly grating down-home country flavor. (Cubby Broccoli was a friend of the real Hughes, making this all a kind of an in-joke.) And there is Charles Gray as the head of SPECTRE, taking previous Blofeld Donald Pleasance’s feyness to its inevitable extreme conclusion. Returning to our Batman references, Gray’s Blofeld wouldn’t have been out of place at all as a villain on a ’60s TV show – he has clones, carries a cigarette holder, and at one point dresses in drag. Adam West was even considered for the part of Bond before Connery returned. Someone get the Commissioner on the phone.

“Keep leaning on that tooter, Charlie, and you’re gonna get a shot in the mouth!”

Finally, there is Tiffany Case. Jill St. John’s character is maddeningly inconsistent, but her attitude makes her unique among Bond girls. She’s the kind of girl who’s not afraid to insult a little kid right to his face. Or refer to random gas station attendants as “Curly.” (I’m surprised we never see her walking around Circus Circus just tripping little kids and laughing at them for kicks.) She may not be the sharpest tool in the shed, but she’s easy on the eyes. She’s got a big mouth, but… well, actually, that’s about it.

Ladies and gentlemen, welcome to America.

“You dirty double-crossing limey fink, those goddamn diamonds are phonies!”

The Bond movies are a series of amusing, entertaining sideshows, designed from the beginning to be a three-ring circus of sex, violence and humor. They move us from point A to B, and always do it with a certain formulaic style. Diamonds suffers, critically, the same way Vegas itself does – people enjoy themselves while they are there, then come home and knock it later. With Diamonds, the Bond team took a cue from good ol’ Jimmy Dean and learned how to make sausage. They stopped pretending it was high art or drama – none of that high-falutin’ nonsense – and relaxed into a lower gear that would run the series through much of the 1970’s.

The jig, as a stereotypical American gangster might say, was up. Diamonds Are Forever was the first time the Bond series acknowledged, like Vegas, that it was just empty spectacle anyway.

Why not sit back and enjoy the show?

*Yeah, most of Goldfinger was set in the USA as well. But it’s not overtly “American.” Let’s just accept for the sake of argument that it could’ve been set anywhere where there is really big vault of gold.

T.R. Wilcox works in the importer/exporter business.  He can be found on Twitter talking about forgotten cultural relics at @TRWilcox.

First Bond Movie: You Only Live Twice
Favorite Bond Actor: Connery. I hate to be boring, but sometimes the best choice is the obvious one.
Favorite Bond Girl:  After recently re-watching Thunderball, I might say Claudine Auger or Luciana Paluzzi. But don’t make me choose. Can we cheat and count them as one?
How I Discovered #Bond_age_:  My Twitter feed? I have a feeling @echidnabot may have something to do with it.
First #Bond_age_ Live Tweet: Skyfall. (Better late than never.)