When the Best Really Is the Best
by Cameron Bowman (@festivallawyer)

It’s rare when something is the consensus “best” of something and it actually IS. I mean, I love the Doors, but “Light My Fire” is probably my least favorite song of theirs. In fact, my personality is such that when everyone thinks something is the best I am usually the guy saying, “nah my favorite is___(insert unpopular opinion here) ”

That’s why it’s nice when popular opinion and the critics agree with what is personally my favorite. Not only is Goldfinger my favorite Bond movie, I think I can make a convincing case that Goldfinger is also the BEST Bond movie.

Goldfinger was not the first Bond Movie I saw in theaters as a kid. That was “Live and Let Die,” a film that holds up reasonable well. But Roger Moore had started to send the series into cartoonish spiral. The gadgets got more and more outlandish, the villains more and more silly and the plots more ridiculous. I think that’s why Goldfinger was such a joy for me to discover after seeing some of the lesser Bond films. (I’m looking at you – The Spy Who Loved Me.)

It’s funny because I lived in England as a kid and actually had the Corgi Aston-Martin from Goldfinger as a toy (ejector seat included!), but I had not seen the film at that time. I also had a neighborhood friend who had a coffee table book about James Bond movies and I remember being fascinated by the picture of Shirley Eaton covered in gilded body paint. So by the time I finally did see Goldfinger, I had a pretty good sense that a lot of cool ass stuff was going to happen in that movie. AND IT DID.

When Rolling Stone magazine made a list of the all-time greatest Bond films they put Goldfinger at #1. Their explanation?

“This is the time capsule Bond movie, the one that explains to future generations why we’ve been obsessed for 50 years and counting with British agent 007. In his third go-round in the role, Sean Connery is danger and sexual swagger incarnate, wearing a tux under his wetsuit and ordering a martini “shaken, not stirred.”

My reaction when I first saw Goldfinger was exactly the same. I was simply blown away by all of it. Bond wearing a tuxedo under his wetsuit… making smoking look cooler than anyone has before or since, driving an insanely cool gadget-laden car.  And when you are a teen boy seeing a movie where people constantly talk about “Pussy Galore,” this leaves quite an impression on you.

To say Goldfinger is iconic is an understatement. Almost everything in this movie has been referenced or parodied (Random Task!) in the years since it was made. Because it has been so well mined for comic gold (ZING!) and so frequently ripped off and parodied over the years, it is easy to forget just how amazing this movie is. So here are a few reminders.

Are you freaking kidding me? Shirley Bassey destroys this song. The song (lyrics by Anthony Newly!!) was number 8 on Billboard’s Hot 100 for 13 weeks, shooting Bassey and John Barry to instant fame.  Other than the Monty Norman Bond Theme itself, “Goldfinger” is the most famous of the Bond songs.  I particularly like that it’s almost written from the villain’s perspective.  And because of that it makes you think that he must be pretty badass to get his own song. I also really like that the song tells you everything you need to know about Auric Golfinger…. “HE LOVES ONLY GOLD…ONLY GOLD…HE LOVES GOOOOOOOLLLLLDDDDD…..” It’s like, “Check. Dude loves gold. He may do something crazy to get it.” (P.S. Five bucks says you heard Shirley Bassey belting out that lyric in your head when you read that lyric to yourself. The lyrics are inseparable from the voice.)

Sean Connery is such a badass. I like Daniel Craig and all, but he is so tortured and angsty. I guess that’s more realistic.  But who wants to watch Bond emote?  Connery in Goldfinger is the quintessential Bond.  This has to be the origin of the phrase “Women want him and men want to be him.” I especially love how Connery’s Bond just loves messing with people. What other explanation do we have for the golf game with Goldfinger? It certainly doesn’t advance his mission. But Goldfinger is a bully and a braggart and Bond decides to mess with him. You get the feeling that this Bond is dangerous, a dude who might kill you just because you rubbed him the wrong way. He seems to act first and think later a LOT in this movie. I mean why mess with Goldfinger’s girl at the beginning of the film? Obviously, she’s not going to survive to see the second act. Bond’s ego causes a lot of problems, but this dangerous, twitchy, bull-in-a-china-shop Bond thrills like none other.

I love me some Dr. No and Blofeld. I love many Bond villains. Hell, I am even willing to give some love to villains like Christopher Walken’s blond baddie and Mr. Widd and Mr. Kidd. But Gert Frobe’s master villainy puts him at the top of a very short list of best all-time Bond villains. Not only is he a great villain but he gets the most iconic scene of ANY Bond villain. “Do you expect me to talk?” an anxious Bond asks after Goldfinger straps him to a table with a laser heading right to his crotch. “No, Mr. Bond,” comes the classic reply. “I expect you die.”

I think you can argue that Thunderball has the quintessential Bond plot. In fact, that’s probably why that film’s plot line got recycled so many times by later Bond movies. In fact, certain parts of Goldfinger’s plot don’t make a lot of sense at all. But I really like Goldfinger’s clearly defined motives and character. He loves gold. He REALLY freaking loves it. So of course he is involved in a plot to make his gold more valuable. He doesn’t want to rule the world or hold it hostage. He just loves gold. It’s perfect.

Is this film perfect? To be fair, the movie shows its 50 years. Some of the special effects are not so special anymore. It’s jarring when you hear Bond talk about how the Beatles are best listened to with earmuffs. And when Bond “playfully” attempts to woo Pussy Galore with some force, it feels creepy and misogynistic. All that said, Goldfinger truly is the “gold standard” (Double zing!) of Bond movies. 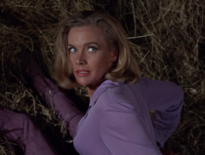