Welcome Monty Python Blogathonners! Despite this piece being commissioned specifically for the Monty Python Blog-a-thon, any discussion about John Cleese’s brief tenure as Bond’s quartermaster must also include a primer on Desmond Llewelyn’s legacy as Q. So that is where we will begin, in 1963 with From Russia with Love, where Q made his first appearance and dispensed an elegantly simple attaché case. 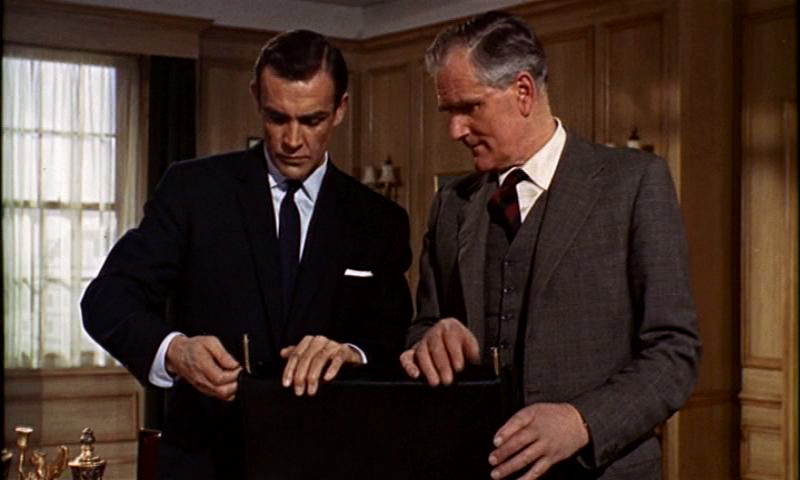 Desmond Llewelyn appeared in more James Bond movies than anyone else. In 17 films from 1963 until 1999, Llewelyn occupied the role of Q, the MI-6 gadget lab quartermaster. Llewelyn played the crotchety uncle to Bond’s loose cannon nephew, always lecturing 007 about his juvenile tendencies.

Change in the Bond cinematic universe is inevitable and tolerated, but only with tremendous resistance. Despite witnessing five (going on six?) 007 makeovers, the public greets every new Bond with side-eye skepticism. So when Desmond Llewelyn’s Q introduced John Cleese as his successor in 1999’s The World is Not Enough, Bond fans, predictably tossed “the young fellow” some side-eye of his own. There had only been one Q, and no actor in the James Bond universe would ever be more beloved than Desmond Llewelyn.

Upon introduction, Pierce Brosnan’s Bond quipped, “If you’re Q, does that make him… R?” Eon had the good sense to introduce Cleese as “R” rather than another “Q.” Fans still rallied against the Monty Python vet’s introduction, fearing perhaps that the legendary comedian would turn Q Branch into a slapstick circus. Our first impression of Cleese as R comes with his jacket stuck in the door of a BMW. The slight gag however is not played for slapstick laughs, but rather to re-establish the Q/Bond adversarial candor. Unfortunately for Cleese, screenwriters then saw fit to engulf him in a hamster ball jacket, thus reinforcing our fears about the potential for heightened Q Branch slapstick.

The film keeps Cleese in a strict line of succession, continuing the trajectory of the oft-combative relationship between Q and James Bond. Pierce Brosnan’s iteration especially brought out the best in Llewelyn. Take for example when Q details Bond’s BMW and cell phone/remote control in Tomorrow Never Dies. Q appears as an Avis employee and asks a series of questions regarding the various levels of insurance Bond will need on his rental. The moment beautifully plays with our expectations for a Q Branch encounter, but this kind of indirect humor only works with extra-textual information gleaned from many years of cinematic repetition. Note the glee with which Brosnan flaunts his destructive tendencies, strictly for Q’s benefit.

Meanwhile, when Q introduces John Cleese’s R in The World is Not Enough, Cleese brought only his ample history to the table as one of Britain’s pre-eminent comic personalities. Many fans believed he shouldn’t tread on Llewelyn’s turf. No matter the reality of time and tide. Someone would eventually have to replace Desmond Llewelyn. Why not Cleese? It seemed right.

Bond: “You’re not retiring anytime soon… are you?”

Q: “Always have an escape plan.”

On that final piece of wisdom, Desmond Llewelyn fittingly presses a beep-boop button and lowers himself into the floor, his final goodbye to Bond and Bond fans everywhere. His retirement a bittersweet send-off. Three weeks after the premiere of The World is Not Enough, Desmond Llewelyn died in a car accident.

The Unfortunate Future of Die Another Day

Unfortunately for Cleese’s legacy in the James Bond universe, Q/R made his second and final appearance in the much-maligned Die Another Day. The first Bond film after Llewelyn’s passing. The perfect storm of anti-ingratiation culminated by the introduction of James Bond’s invisible car — a regularly-cited scapegoat for all that went wrong in the 20th Bond film. In reality, the Aston Martin Vanquish, retitled “Vanish” for the film, contributed to the most interesting visuals and stunts in the film.

Despite success at the box office, fans regarded Die Another Day as a certifiable stinker. Critics cited that the series had become too beholden to a culturally trending morass of surreal CGI special effects, thus supplanting the old-fashioned stunt-work for which the franchise had formerly been known. Alongside the turnover from Q to R, the Q Branch briefing scene within Die Another Day proves to be a fascinating subject for further dissection.

The scene opens with James Bond cleaning a gun at his desk. He hears a commotion outside in the hall. He steps outside. Slumped bodies, including Moneypenny’s, litter the office. Bond takes out a gaggle of heavily armed assailants one at a time until he reaches M’s office. Here he finds his boss held hostage. He fires one round through her shoulder and into her captor. She falls. Bond empties the clip, sending the evildoer flying. He freezes in midair. R steps forward through a cloud of gun smoke, already lecturing 007 about how a “perfect marksman really shouldn’t shoot his own boss” before removing Bond’s now conspicuous VR sunglasses.

Die Another Day toys with our perception of reality. Virtual reality had grown into an omnipresent technological buzzword, and Bond must always remain on the cutting edge. This, the movie suggests, is the future of cinema. Limitless scenarios no longer beholden to grounded reality. Just as the theatrical audience had recoiled at this unlimited future, so too does Bond. James goes on. “Give me the old firing range any day, Quartermaster.” To which R says, “Yes, but it’s called the future, so get used to it.”

Two things about this exchange. Bond specifically addresses R as “Quartermaster” here, suggesting the film wanted to avoid referencing John Cleese under his newly assumed role of Q proper (as he is listed in the credits), likely in deference to Llewelyn. Second, you’ll note the irony contained within Die Another Day’s notion of “the future.” We, the modern 2016 audience of this film (and the 2002 audience to a lesser degree), and Bond aligned against the falsehoods of a future guided by virtual experiences. At the time of the film’s release, Die Another Day would have presented Cleese as the mouthpiece for the presumably progressive audience. The future Q/R championed, in fact, turned against him.

Furthermore, this conversation about the future takes place while Cleese’s Q and James Bond enter an area used for storing Q Branch “relics.” Bond plays with Rosa Klebb’s spiked shoe from From Russia with Love and the Thunderball jet pack. The audience notes the Acrostar mini-jet and the alligator sub from Octopussy in the background. This is the perpetual labor and challenge of the Bond franchise – cherishing and dwelling on the past while constantly moving forward, advancing technologies, the new faces of 007. John Cleese, vis-á-vis his VR training module, represented the bold step into the digital future of 00-training and, with a little mental leap, the bold new world digital filmmaking. Bond fans only want new if the new can be made to feel old and familiar. Thus, Die Another Day artificially surrounded Bond and Q with a basement full of nudges and winks to Bond’s past.

Through no fault of his own, John Cleese has been judged guilty by association with Die Another Day. By merely aligning with “the future” in the film, he’d been deemed persona non grata by fans and, perhaps, ultimately by the James Bond production team. After the critical failure of Die Another Day, James Bond waited four years to return to theaters in Casino Royale, not coincidentally Ian Fleming’s very first Bond novel, and without the aid of a quirky Q Branch.

And now for something completely different…

Eon reacted to Die Another Day’s perceived failures by “rebooting” the franchise and returning to Bond’s roots, to Fleming’s earliest work. In this new Bond film, they did not write a part for a Q Branch quartermaster. Nor would there be room for Q’s “future.” During production, director Martin Campbell said Casino Royale would be “grittier and more realistic” and that they’d be “getting away from the huge visual effects and comic relief.” John Cleese’s Q represented the direct link to elaborate visual effects and comic relief. The future had become the past. Q would not reappear as a character until Skyfall in the form of a quite serious Ben Whishaw.

In the years since Cleese last donned the quartermaster’s lab coat, the comedian has been predictably critical of the Bond franchise’s dour emulation of the Jason Bourne movies and reportedly longs for a return of the British class humor inherent to early incarnations of the character. Cleese speaks for many Bond fans who also wish the series would return to those frivolous adventures filled with humor and unnecessary gadgets. The trick, as ever, would be finding the middle ground. The trick, as ever, would be finding that old familiar sweet spot of humor, adventure and glamour and passing it off as “new” rather than the “future.”

Unfortunately, James Bond never offered Cleese the opportunity to make the role of Q his own. The World Is Not Enough‘s screenwriting team did him a great disservice by punctuating his first scene with a hamster ball pratfall Using some of the curmudgeonly persona he’d perfected in Fawlty Towers or Clockwise would have made him a welcome foil for any James Bond — even one more fully grounded by a measure of reality. 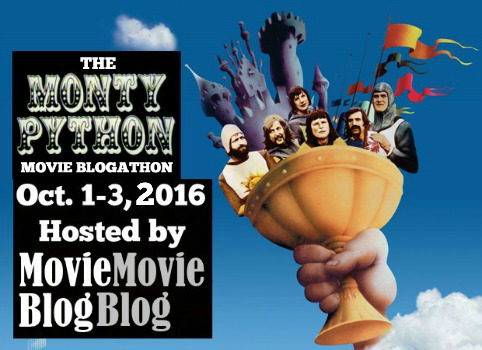 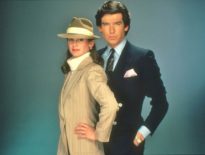