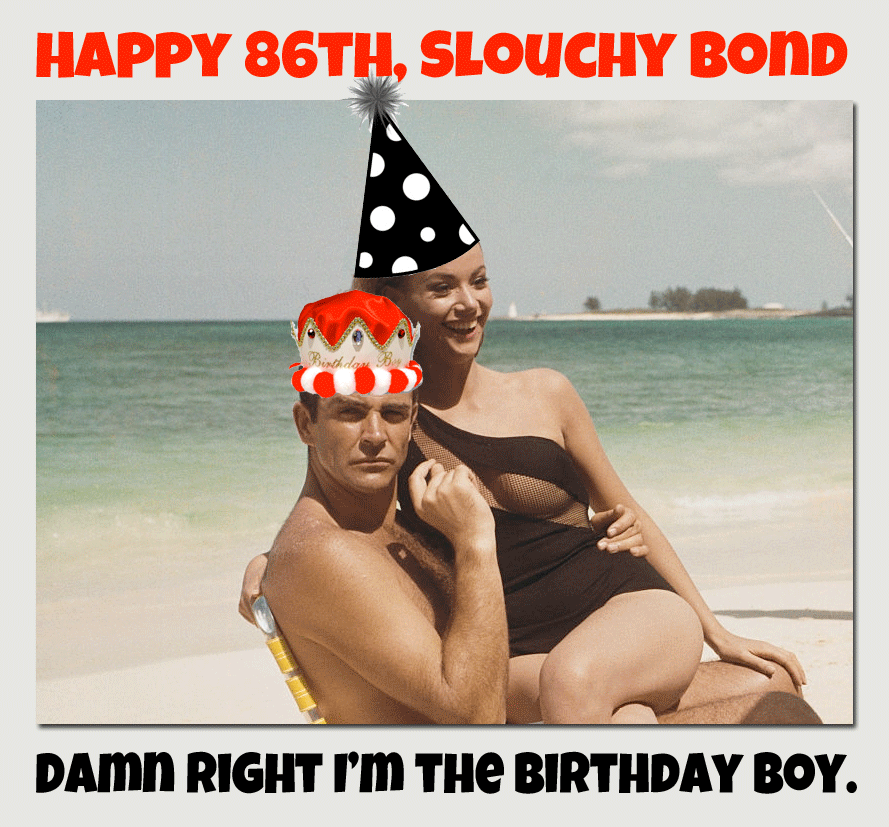 #Bond_age_ celebrated Sean Connery’s birthday a little early in order to accommodate a screening of ZARDOZ into the live tweet schedule. But it is August 25th that belongs to Slouchy. You’ll find plenty of websites celebrating the big day with facts you didn’t know about Sean Connery or favorite Sean Connery quotes. I struggled to decide how best to celebrate this birthday. We joke about Sean and use the “Slouchy Bond” nickname because it’s fun to joke Sean Connery’s place in the James Bond universe because, well, it’s less interesting to cite Connery as the best Bond.

The fact of the matter is that he is the best Bond. He and Terence Young molded Fleming’s prose into the most famous hero in the world. Later on in his career as Bond, the relationship between the man and the films turned rather sour. I can’t blame him, honestly; the script for You Only Live Twice should have felt like sandpaper between his nether regions.

If you want to learn more about his potential career as a footballer or his rumored encounter with Lana Turner’s gangster boyfriend, I trust you’ll know how to find Wikipedia. Right now, however, I’d rather share an interview from 1964 that still finds Connery talking about the success of James Bond with much respect for the franchise. It seems more fitting for #Bond_age_ to celebrate the life and times of Sir Sean Connery with a moment reflecting the man’s sincerity and intelligence at a moment when everything was right in the world of Bond.

He has a reputation for being a brute in a suit. Sometimes, likely due to his Diamonds Are Forever contract demands, he has the reputation for being a bit of a scrooge or a premadonna. From what I’ve read, it seems more like Sean Connery is a man of principle. He’s true to his beliefs. He’s confident and cocksure, perhaps to a fault. He’s a man who could tell 1000 tales, and we’d listen intently to every single one.

From everyone at #Bond_age_, happy birthday, Sean Connery.