These December days slide faster than Clark W. Griswold on a snow saucer with experimental, industrial-strength lubrication. So last night when I realized it was Tuesday and I had no #Bond_age_ live tweet planned, I panicked and consulted the inner circle. Greg McCambley had this little Eurospy ditty in his back pocket, and I was certainly grateful for the reminder. I’ve thought about foisting this upon the Twatterverse for some time now. And if you’ve been waiting in eager anticipation for the #Bond_age_ version of a Eurospy B-side, you’re in for a treat. 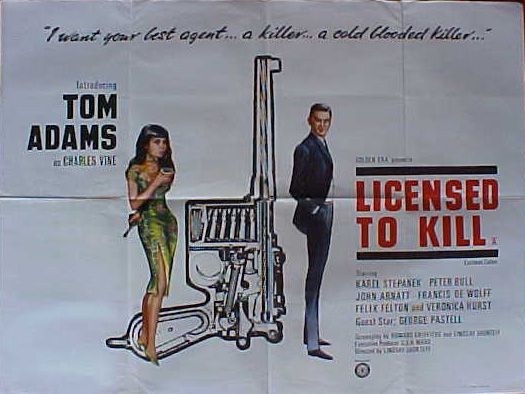 Aka Licensed to Kill, this 1965 spy caper stars Tom Adams as James Bond wannabee Charles Vine. The most notable thing about The Second Best Secret Agent in the Whole Wide World is the Sammy Davis, Jr. theme song which was regurgitated in 2011’s Tinker, Tailor, Solider, Spy. The “Second Best Secret” agent monicker actually proves to me more than just a tongue-in-cheek reference to James Bond. When a Swedish scientist invents an anti-gravity and his daughter hopes to offer the technology to the U.K., the government calls upon Agent Vine (a mathmetician/exterminator) because James Bond just happens to be indisposed. Nothing like being your country’s backup plan. And that’s rather fitting, because in many ways, Charles Vine was also a #Bond_age_ packup plan for when I failed to do my programming duties.